A carefully tended ancient garden that provides colour all year round, the Old Orchard Garden is the work of horticultural enthusiasts Celia and Tim. Keen to encourage wildlife, they keep the garden interesting from January to December. 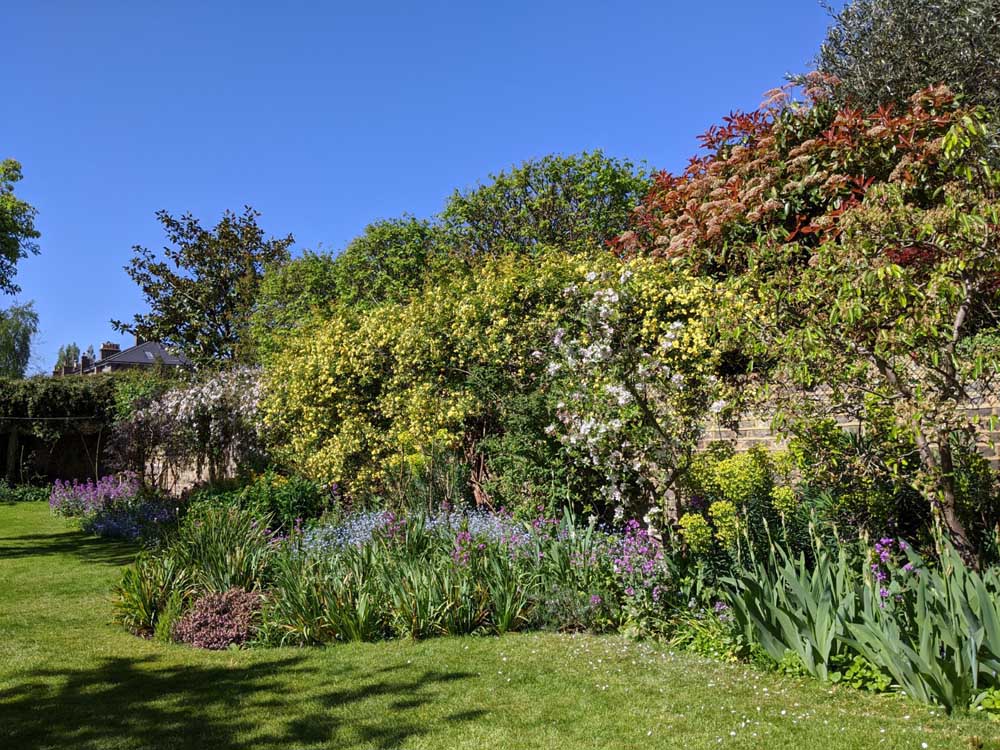 Celia says: Our garden is best described as an English garden. It has been created on the grounds of an old commercial orchard which was in use before the house was built in 1864. There remains in the centre of the garden the lone survivor, a rather decrepit nearly hollow pear tree. The garden has evolved. We have gradually over the years selected an assortment of plants, and let the enthusiasts amongst them spread and prosper, such as forget-me-nots and honesty, although these are rigorously uprooted after flowering to let the summer plants develop their own support systems. They are of great benefit in bringing the butterflies and insects into the garden.

My list of favourite flowering plants within the year begins with the white flowering shrub, Exochordia x macrantha “the Bride”. The Coronilla Glauca is usually still bearing its bright yellow flowers, having been flowering from December. The Kolkwitzia amabilis (Beauty Bush) makes a great show before the summer flowers fill the borders. Altroemeria give a bold start to the warm season, side by side with bright lemon yellow Sisyrinchium striatum. Euphorbia ‘Stardust’ brings a sparkle of white to a shady corner. Another useful flowering shrub is Bupleurum fruticosum, commonly known as shrubby hare’s ear, for it provides a great support for the perennial wild sweet pea nearby. We have quite a few roses in the garden, but Abraham Darby stands out for its scent and cupped blooms in shades of pink, apricot and yellow. I also particularly like Compassion, a repeat flowering climber. Towards autumn the Clematis jouina praecox, which is restrained by being trained it within a support, cascades with white flowers.

When we first arrived, the garden was remarkable for only having very few flowering shrubs and flowers, as it was mostly an overgrown wilderness. We both take part in maintaining the garden. Tim keeps the lawn in good shape, looks after the pond, is the compost maker, and is the main pruner of wayward shrubs. He also grows citrus trees in pots, herbs and some salad crops. I tend to take care of the plants and flowers within the garden. I try to create interest each season with a variety of leaf and flower colours, and, particularly in the winter, sculptural shapes, most notably the pear tree in the centre of our lawn.

One silver-lining of the Covid-19 lock- down has been the opportunity to look at some plants more closely than usual. I have taken immense pleasure from following the development of a single flower of our herbaceous Clematis integrifolia Hendersonii. The photographic diary below shows how the buds are formed within bulbous pointed joined leaves, which open to reveal a pointed sheathed bud of indigo colour. As the bud grows, it begins to hang down, and the leaves bend in harmony. The bud then begins to unfurl rather gracefully over a couple of days to produce four sepals surrounding yellow/white anthers. By then the indigo has faded to lighter blue, and the flowers hang like small bells against the lime green leaves. 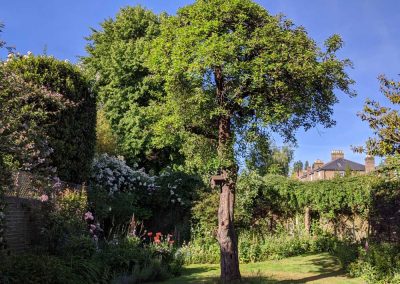 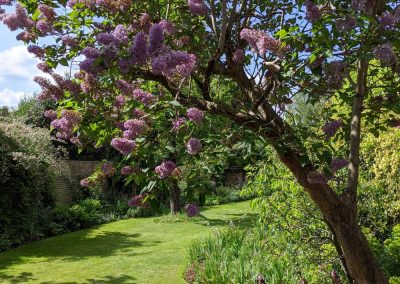 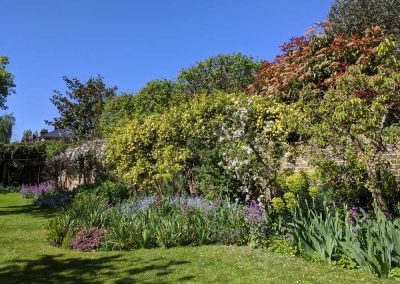 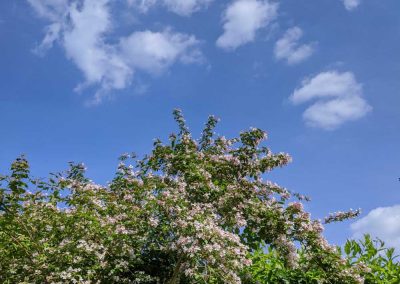 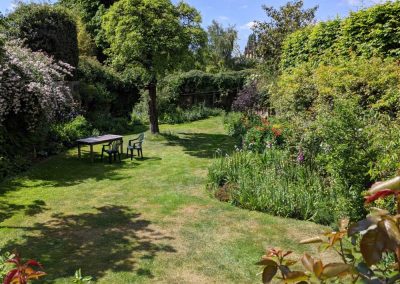 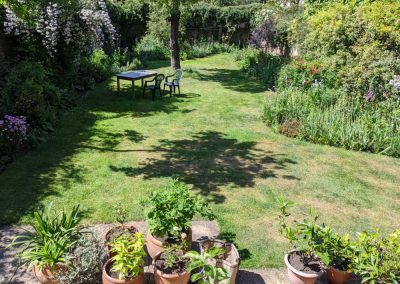 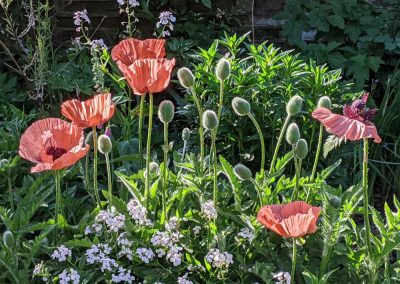 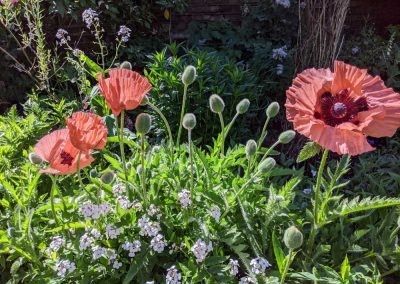 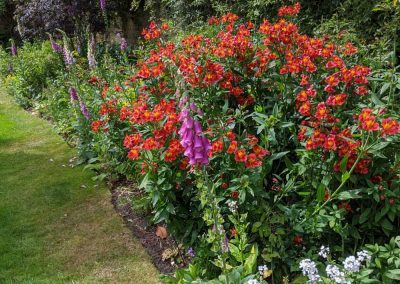 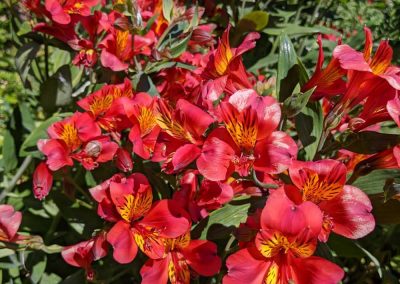 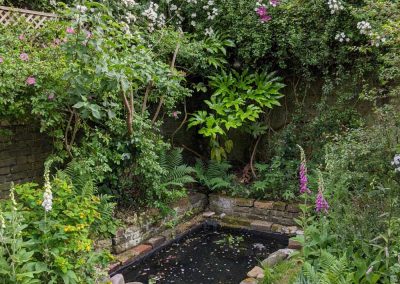 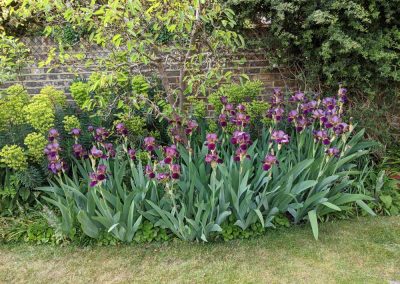 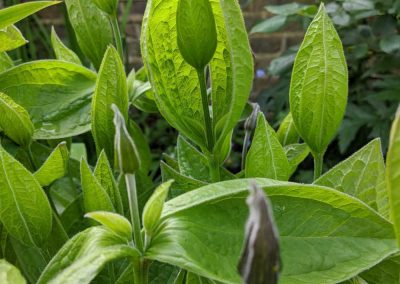 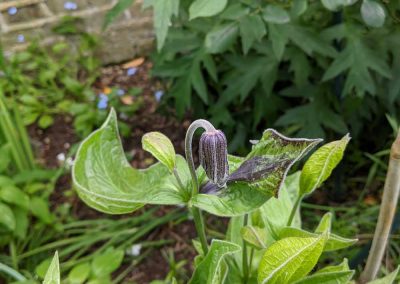 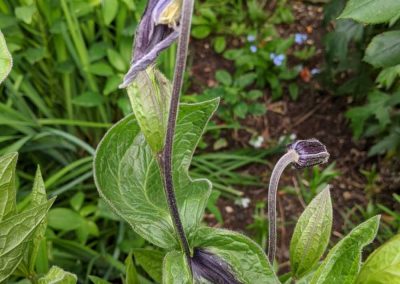 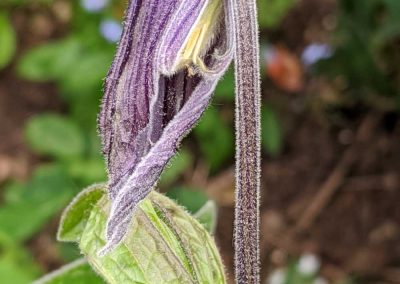 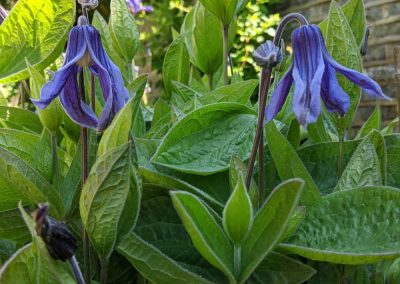 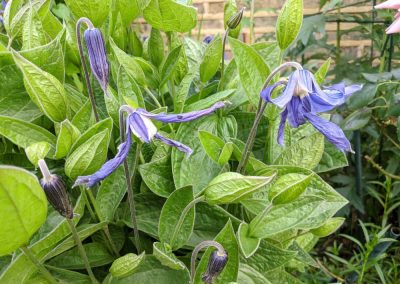 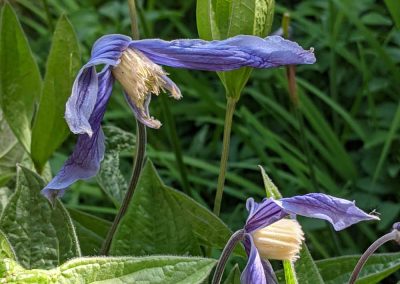 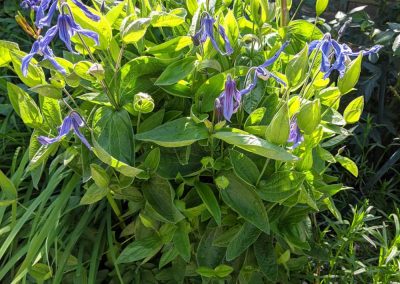